As promised here is our Christmas 2013 Update with a few more details for those that want them. 🙂
I will start with what the back of our 2013 Christmas Card read…
“God has given each of you a gift from his great variety of spiritual gifts. Use them well to serve one another.” 1 Peter 4:10

2013 has brought so much joy to our family as we have watched Cashel grow and found out about the new baby boy who will join us some time early in 2014. Benjamin continues work at Kite & Lightning as a Project Manager and Alex is home with Cashel, also working part time with her grandmother and selling Pampered Chef. Benjamin serves as part of the worship team and Alex is on the leadership team for nk.moms through our beloved church, newlife.nk. We are continuously blessed by family and our friends who are family; and are ever so grateful for “our village” who is helping us raise our children. Our greatest joys come from being on the mission with Jesus in our community. You can read more about our year on Alex’s blog at www.inspriationclothesline.com with posts about all that keeps us moving and loving those around us. Happy Holidays and here’s to a joy filled 2014!

Cashel is the light of our life and brings so much laughter and joy to us all. He is a busy little boy with an unbelievable curiosity and zeal. I truly have not seen anything quite like it in a little one. He has quite few words but will only share them when he sees fit. He’ll say “Momma,” “Papa” (said in a whisper most of the time), “Nona,” “Grandad,” Dog “Go” or Puppy “Go-Go,” “Nana” for banana, “Mmmm” for milk, “ooo ooo ahh ahh” for Curious George, “Choo Choo” for train (and other big vehicles) and an enthusiastic “Hi!” He also waves bye-bye, scratches his chest when he says “ooo ooo ahh ahh” and toots the horn when he says “choo-choo.” Can you tell I love every minute of this!
Alex (that’s me) has spent the holidays really reflecting and learning a lot. I’m back to my loves of reading and writing and strive to get outside as much as possible. I am also really focused on simplifying our lives in any way we can and am taking an active role in our community. I am dedicated to two wonderful groups of ladies – nk.moms and our Women & Wine group. My desire is to see women engage in stimulating conversation, feel connected, and be growing. This is creates a very “humble heaviness” and “is a burden that breaks my heart” (Rebekah Lyons). I have such a heart to see women flourish and be healthy mind, body and spirit.
Benjamin loves being a father, or at our house a “Papa.” He is truly Cashel’s favorite person and I think the feeling is mutual (of course Momma is in there for a close race). He is working full time at Kite & Lightning and feels blessed to daily be stimulated by a job he loves and one that is constantly challenging him. Working alongside his best friend sure doesn’t hurt the situation either. Kite & Lightning is a software development firm, established in 2010 with the desire to produce high performance, well-crafted, energy management solutions. Basically I like to say that they help your building “go green.” Benjamin LOVES football – more then when we met – and has several fantasy teams going, we watch lots of Sunday, Monday, or Thursday football (well he watches and I write/read/craft) 🙂 He is also serving on the newlife.nk worship team and has a refreshed love for worshiping the Lord and serving the people in our community.
Baby Boy #2 will join us in early 2014 and you can stay tuned for a name update and lots of fun posts when he arrives. We were thrilled to host another gender reveal party for family called a “Stache or Sash Bash” and it was so much fun to find out together that Cashel would have a little brother and we’d have TWO BOYS!
This year was filled with excitement and joy, and also loss. We said goodbye to Benjamin’s grandfather Phil Coney who is survived by his wife Shirley (Nannie) and children, one of Benjamin’s cousins Kurt Jacobson passed away and is survived by his parents and brother, and also my cousin Jason Walenta lost his battle with cancer and is survived by his wife Elizabeth and two children Indigo (6) and Kepler (4) and his sister and mother. As I have said goodbye to these loved ones and watched their families grieve I am reminded of how precious life is and to hold those we love close.
We have done that. We are focused on making memories and having adventures together. I’m excited to share some of the highlights in a photo play by play. Yes I’m thinking of the great grandparents and family that live far away as I post… 🙂
This time last year we were celebrating Cashel’s first Christmas and he was dedicated to the Lord on December 23, 2013 and we celebrated with many family members and friends.

In January Benjamin and I became “Auntie” and “Uncle” for the first time to our sweet nephew Cooper Wild. And Cashel got his first cousin…

We also took our first family trip to Leavenworth!

February was about the time that Cashel started changing – a lot – he really started to eat pureed foods and started sitting up too!

Lots of time with Momma at GiGi’s while she works.

March brought Cashel’s first Easter!
And a very special outfit for him to wear from Great Aunt CiCi

In April Alex turned 29 – eek the last year of her 20’s has arrived. We hit Anthony’s for a birthday dinner and Benjamin made her a beautiful new gate for the front yard as her gift. What a wonderful celebration. 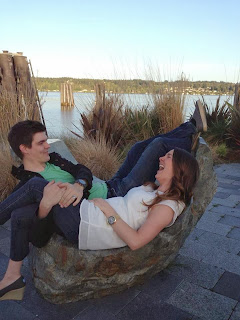 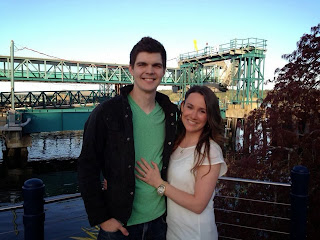 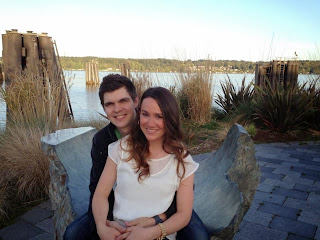 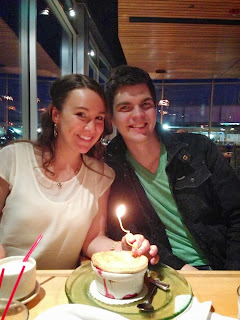 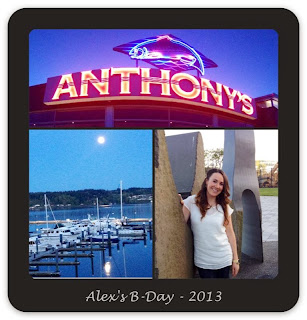 First train ride in Chicago – a ride Papa and the Jacobson Aunties and Uncles have done many times when visiting Great Aunt Nancy – CiCi.

My sister – Aunt Tee or “Tee-Tee” graduated from Northwest University with her degree in business. One year, exactly, after Benjamin graduated with his degree from NU in Ministry Leadership.

Rounding out the month was Cashel’s first international trip. A trip to Ireland to see Alex’s sister, Tonie, marry the man of her dreams – Eric Sexauer. This was an incredible trip as we got to take our little Cashel Rock to see The Rock of Cashel an absolutely incredible fortress in Ireland. We were reminded of , and learned a few more, reasons why he is named after this incredible place. Our trip was filled with wedding preparation, evenings of wine and coffee with dear friends, trips into downtown Kilkenny, and lots of eating and visiting our “family” there.

Did I mention that Benjamin made the wedding cake and also was the officiant. 🙂 A man of many talents he is!

June held Benjamin’s first Father’s day and we celebrated in style. Cashel attended his first “Circus” at our local private school – Momma has been a part of this for many years.
We celebrated 5 years of marriage too!

5 years married – the year of friendship!

Stay tuned for the story behind these rings. I received mine at our 5 year anniversary dinner and Benjamin got his while we were in Hawaii in July.
July started with finding out we were expecting Baby #2 and celebrating Cashel’s “last first holiday.” The fourth of July was extra special this year.

Benjamin and I did our first overnight away from Cashel Man – in preparation for our trip to Hawaii. We headed to Chelan for the weekend with my sister and brother in law. So much fun!

We saw the fireworks at home in Poulsbo for Cashel’s “last first holiday” The Fourth of July. It was fun to start telling close family and friends our BIG NEWS too.

July also took Benjamin and Alex to Hawaii (Kona – for the first time) for the wedding of our dear friends Janet and Mitchell Andersen. We introduced them so this was especially significant for us having watched their love story unfold over 5 or more years! We went toddler free thanks to friends and grandparents who cared for Cashel Man. And boy it was wonderful. We knew at the time we were expecting Baby #2, and yes there was quite a bit of morning sickness and laying around on Alex’s part, but it was so wonderful to steal away just the two of us. The wedding was gorgeous and another reminder of why we chose each other!

In August we shared with everyone our big news about Baby #2, Momma spent a lot of time preparing Cashel’s new big boy room, and Cashel turned one year old and took his first consecutive steps on his birthday. His party was themed “Cashel for President” and family and friends came out in droves to celebrate our little man.

As the month progressed and turned into September our happy boy was truly a “walker!”
See Cashel’s big boy room by clicking here.
You can see lots of pictures from the party by clicking here…

In September we spent lots of time outside as it was an unusually warm summer for us.

October was Benjamin’s 25th birthday and of course was a Seahawks theme this year, it was also full of Fall traditions and dressing up! 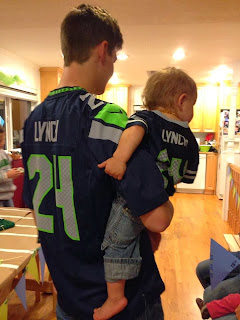 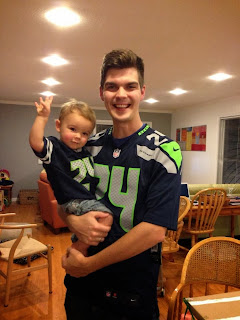 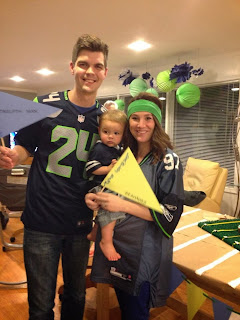 For Halloween this year we dressed as a family of monsters. We hit the Poulsbo Recreation Center activities first and then did some trick or treating in downtown Poulsbo. Cashel’s favorite part was the ice cream from Mora. His first ice cream as he is still showing signs of an intolerance to lactose. A real treat!

November was Thanksgiving, we were with the Duchemin’s this year, and was a day filled with things to be grateful for.

On Thanksgiving we hit double digits only 99 days were left until New Baby J’s due date!!
We finished out 2013 with our annual tree hunt in the Olympic National Forest!

So… doing all this reminiscing makes me so nostalgic and EVER so grateful.
Be looking for a few more posts about our 2012 coming soon.
Rock of Cashel
Eric and Tonie’s Irish Wedding: First International Trip as a Family
Fifth Anniversary: Our Friendship Year
A few comparison pictures – Cashel’s first and seconds.
Belly pics for Pregnancy #2
The birth of Baby #2
Facebook Comments Box