Camper is ONE ~ A Seuss Celebration

For our second born son the theme chose itself. He was born on Dr. Seuss’ birthday so from that first day of his life, I knew we’d have to celebrate Seuss style! I had so much fun planning and executing this grand celebration of Camper’s first year of life.
This was done on a budget, as are all our parties and had several “hiccups” along the way; but could not have turned out more beautifully. We had to change locations last minute – the parks department accidentally gave us a reservation after hours and luckily I caught the mistake a couple of days before the party so we switched locations, and in the end it was even better in the new spot!

I do a chalkboard with statistics every year for my kiddos’ birthdays, but this one was special as it was an “Oh the Places You’ll Go…” themed board. The invitation, designed by Benjamin, also featured that same Seuss story.

I used the “Thing 1” and “Thing 2” characters, along with Truffala Trees as inspiration for the centerpieces and looked for ways to incorporates the stories as much as I could.

Camper’s guests signed the “Happy Birthday to You” book and we will pull it out every year for him, so special.

I had so much fun with Seuss Snacks!
Green Eggs and Ham – two ways.
Thing 1 and Thing 2 cupcakes plus Trufflala Trees too!

The cake was simple and yummy! Guests just ate the other sweet treats and we saved the cake for Camp to smash. See those pictures at the end of the post with other family shots.

I had originally planned to do a Nutter Butter Lorax “guy” but we have a dear friend with a peanut allergy and last minute it dawned on me. Pinterest saved the day and I found this fun alternative last minute that turned out even better!
Satsuma “cutie” oranges with google eyes and felt mustaches. So cute.
Gold fish for “One fish, Two fish, Red fish, Blue Fish”
Hop on Pop[corn]
Cat in the Hat fruit skewers
We also had hot dogs, chips, baked beans, and a salad. Guests roasted their hot dogs over a campfire.

I used this memorabilia table as motivation to have the first year baby book and documentation done. It really helped with Cashel so I planned it the same way. Not completely finished but I was sure close. Baby book, album of 12 monthly photos I took, shadow box with hospital outfit, and newborn photos.
I love seeing people look through these awesome pieces of Camper’s history.

The teacher in me is all about the activities…
A craft based on “Put me in the Zoo” – quick, easy, and cute.
A Book Nook with as many Dr. Seuss stories as i could get my hands on, and a bunch of corresponding stuffed animals on a colorful quilt. The kiddos had a blast with this.
“Things in a Box” or in our case bucket. You just transform some clothespins with red washi tape and blue feathers and the kids stand on a chair and drop away. Big hit!

My favorite part was a Flashlight Scavenger Hunt. One of the hardships with a spring birthday – that comes the week before Daylight Savings – is that it is dark really early. I had forgotten this in planning. Originally they were going to have lists/cards and were supposed to find everything around the park equipment and come back for their prize. But it would have been dark…
Well when we realized this, and that we had to change locations, we asked everyone to bring a coat and flashlight. The kids hunted for Seuss characters around the “clubhouse” in the dark, by flashlight, and LOVED it. (We also had guests roast their hot dogs out there over a fire) Instead of a check off list, the kids physically collected the Seuss characters and turned them in for their “prize” which was just the favor that I had prepared for everyone. No printing of extra “maps” or “lists.” All we had to do was tape the characters all over the back yard and the kids just went crazy. They loved it!
Each family got a Dr. Seuss themed reusable tote, they were so fun and colorful. Kids got crazy swirly straws and then a smaller goodie bag to add to that. It has a reading theme…

And included a wee poem about their:
Bookmark
Book stamp
Book plates
And a few Seuss stickers

So one thing I believe in at parties is COSTUMES. We dress up!
Camper wasn’t so sure about Thing 1 and Thing 2 – can I just mention how awesome and incredible Camper’s uncles are?! Yes his uncles!! That was the bonus of the uncles being willing to dress the part because it turns out he didn’t get too freaked out by them since they actually had familiar faces. Can you believe these men? They are the best!

Everyone likes to get in on the costume fun. We put the props by the sign and fun chair for people to take photos with if they wanted to. So fun! Thanks to my teacher friends who lent me the costumes, books, chair, and sign. Amazing!

Camper was so into the cake!
He ended up having to ditch his adorable Seuss bowtie and shirt after that so we moved on to presents nudy! I missed the pic in his awesome One Fish, Two Fish shirt. 🙂
This is the most precious part for me. I was gifted this remote control John Deere tractor on our local Buy Nothing site. Changed out the batteries and it worked like a charm. We have NOTHING like this at home so I knew it would be a hit. Cashel (big brother) gave it to Camper for his birthday and they immediately set to playing together. Look closely at the bottom left picture and you’ll see Cashel’s tongue is sticking out of his mouth with so much concentration. And off Camper crawled to chase after it. So cute! 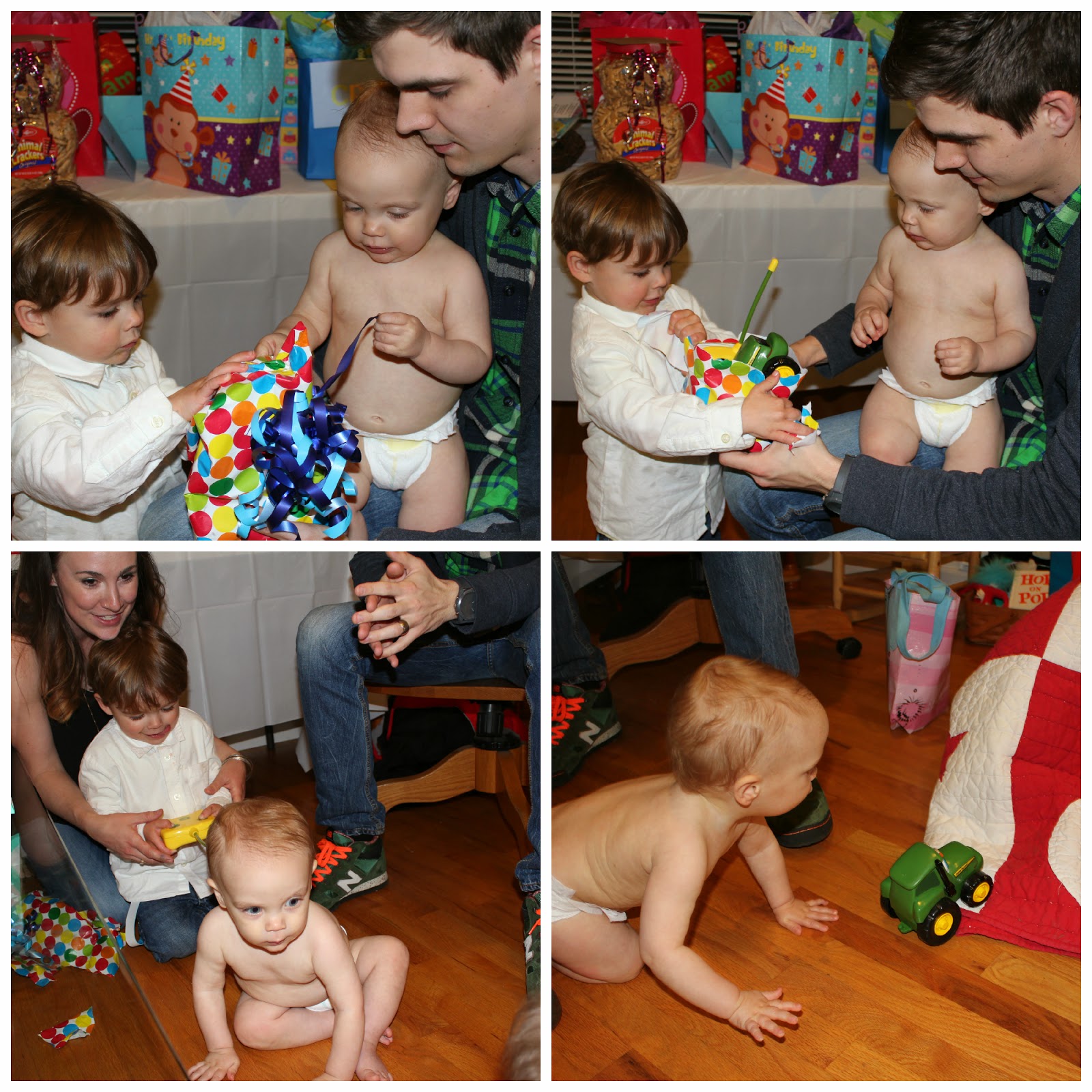 We are a family that really tries to go on adventures and share experiences so on the invitation we included  poem letting people know that if they wanted to, instead of a wrapped gift, they could contribute to a gymnastics class for Camper. He really loves the gym! Quite a few friends and family did that which really helped alleviate the number of presents and pressure for our sweet Camp that night. He loved the special gifts he received, we were able to take our time, and will have a whole year of gym time that will be extra special since everyone gave it to him. So blessed!
“Come Celebrate with me,
It will be incredibly fun!
For it is only once that a boy turns one.
There’ll be food, there’ll be cheer.
And most certainly cake.
If you’d like to bring a gift,
you could help participate….
In collecting some money,
to send me to class.
Not with books or with rules,
but with tumbling mats.”
PS Great Grandma Nanny has the idea to give him the tub of animal cookies. Boy were those a hit!
He really got the hang of it and had so much fun peering into the bags.

Thanks to family and friends for making the Seuss Celebration so special and for being our village. Without you we truly could not do what we do. We are honored to raise our boys with you by our sides.
Happy Birthday my dear Camper.
Facebook Comments Box

Tea Parties are NOT just for GIRLS

Who's Chopped? Ben – The Birthday Boy